I enjoyed part two much better than part one. Much much better. Lots more character stuff. Which is you know, much better! :)

Here's what I understood happened in this section:


Don't you want to just go guzzle a huge glass of ice water after a few chapters of reading this book? 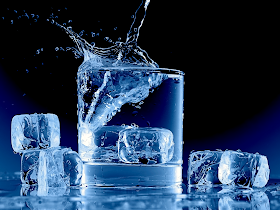 1. What do you think about all the rituals the Freman have surrounding water? Especially the funeral.
2. Any other thoughts you have about the Freman now that we've been introduced a little better?
3.. How do you feel about the way Paul is progressing to his destiny?
4. We had more deaths in this section, two that stand out. Compare and contrast them.
5. What political maneuverings are happening during this section? I'd love a nice uncomplicated explanation!
6. What religious events are happening?
7. What do you think of the Baron?
8. Any foreshadowing moments that stand out to you? What's going to happen?
9. How do you like (or dislike) this section compared to the first? Any new favorite characters?
10. Do you plan to finish and stick with us through part three?

1. I find the rituals quite fascinating. The funeral was really interesting what with taking his water and adding it to the pool, and then having all his "friends" pick out one of his possessions. Hand off his "wife" and kids to Paul was very weird though. Poor Paul. The money system with the rings representing amounts of water too. I loved that.

2. I find them to be very cool. They have some strange and interesting traditions. I'm still not sure why they find Paul so special though.

3. Paul. I'm just not convinced I see what everyone else is saying. I can't get over that he's only 15. I feel bad for him mostly, that he has to deal with all this.

4. Ah. Kynes! And Jamis. One died all alone. One died among friends. One lost to the sand forever, and one immortalized with the gift of his water. I'm still sort of holding out hope that Kynes is actually okay somehow!

5. Yeah, I don't get what's going on with this. The Count guy is working for the Emperor maybe? And he's come to give the Baron grief? The Baron has plans, but he's scared about whatever the Emperor wants. Which is not his nephew as the next Baron I'm guessing.

6. So somehow Jessica has become something powerful to the Freman and Paul is up next? They get drugged with the spice and have hallucinations mostly. And then weird stuff happens. I want to know how you all are understanding these sections!


7. The Baron is disgusting! But interesting at the same time! He gives me the creeps, but I still enjoy his chapters!

8. I'm a little worried about that unborn baby. She's been messed up already. And the whole thing between Paul and Chani? Intriguing but I don't think it'll go anywhere. I'm thinking Stilgar likes Jessica quite a bit though. I wonder if something will happen there. Paul is going to rise to more and more power though, I know that!

9. I really like Stilgar! Chani is interesting too. But not the nephews or the Count. Icky! This section, as I mentioned way at the top of this massive post, because we had more about the characters, the survival out in the sand, the traditions of the Freman and etc. I like that stuff much better than all the political talk that I don't get.

If you do a post with your answers, please link up below so we can all be sure to see it!

Oh and PS. Join us for a chat TOMORROW (that's Thursday for those keeping track!) at 9 pm MDT. :)